I was a child of the 60's, a northern lass who enjoyed many a scorching summers day sat in the middle of the cobbled road, outside my old grannies terraced house,  popping tar bubbles with a well licked lolly stick!...a bit like an organic speed bump I suppose! 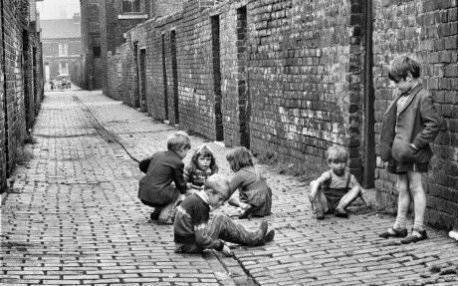 Whenever she caught me doing this, my little Irish granny would take to the street, tea towel in hand, flour covered apron flapping, to admonish me with the kind of vicious enthusiasm only someone who loved you very much could afford.

She'd go on to tell me of the monster that would get me if I kept insisting to taunt the traffic as I did...but no monster my gran threatened to conjure could scare me...oh no!...despite my tender years, I knew of a monster so hideous as to scare all other monsters into the shadows...

The Monster I speak of is...Catholicism!!!... And before you start groaning, be assured I have no wish nor want to launch into some mind numbing theological debate, I'm just going to tell you of a thing that I personally experienced, if you will allow me to (or not).

I was born into a loving Catholic family. Loving not because of Catholicism, loving despite of it!! Now in the mid sixties, when I was but a sproglet, I attended the local Catholic infant school 'Saint Pancreas of the Worthless Miracle' (I may have invented that name). It was very much how you'd expect it to be back then.

Nuns, draped in the cheerless black garb of their oppressive profession, stalked the corridors with their Reaper-esque presence, fluttering here and there like bats on acid using their Rosary Beads to lasso anyone they considered harboured Protestant sympathies.

Classrooms were crowded with tired, wooden desks carved into which the faceless names of pupils past begged to be remembered, their scribblings just as lost as the voiceless babble written in blood and tears on the walls of any asylum.

Each morning, prior to lessons, we had to endure Religious Instruction, which included reciting the Catechism en masse. For those of you who don't know what that is, it's a 'summary of the principles of Christian religion in the form of questions and answers, used for instruction of Christians' or 'Brainwashing via Papal Propaganda', as I prefer to refer to it!

I mean this was heavy stuff!...far too complex for kids so young they still suffered whip lash from the pull of the umbilical cord!

Regardless, Catholic doctrine insisted we chant this and so we did EVERY morning but that's all it was 'chanting'. No thought was attached to it, no deeper understanding or appreciation of Christianity was provided through this, we just coldly and mindlessly repeated meaningless words, terrified should we make a mistake and incur the wrath of the wiry, white haired disciplinarian that was our teacher...Mr Hearst.


In a bid to further our appreciation of the all benevolent, all caring, all seeing Catholic God, Mr Hearst would scream passages from the bible at us with such vehemence, that foamed spittle would project itself from his beardless gob, to cling mercilessly upon the freshly nit combed hair of the poor sods unfortunate enough to sit in the front row.

He would passionately inform us that, for every bad deed we did and each dark thought we harboured, our souls would collect black marks and that if we accrued three black marks we would earn ourselves a Mortal sin and, consequently, forever burn in the fires of Hell in the certain knowledge that the "all forgiving God, who loved all things"... would despise us with a divine vengeance, for all eternity!

Not only was this man a human laxative, he was also both disturbing and disturbed (perfect qualifications for a Religious Instructor) and so we suffered on. If joy did exist at that school, I don't recall it, my memory serves only to remind me of the fear each new school day brought with it.

Fear of Mr. Hearst...fear of the Nuns...fear of God...which essentially boiled down to one fear, that of being punished by any one, if not all, of the above!!

And 'Punishment' to me, was, and remains, Catholicism defined...oh alongside 'Guilt' we must never forget the guilt...as if we could!

Anyway, one day Mr Hearst, fresh and bouncy from a morning of flagellation, announced to the class that there were going to be changes to future lessons in Religious Instruction.

I'm sure many of us hoped we were shifting to Satanism just for the light relief of it but no...we weren't so lucky.

He went on to explain that should any of us wish to attend church, for early morning mass before school EVERY day we wouldn't need to take part in the class religious lesson. You could practically hear the clickity click of little minds ticking over trying to calculate the lesser of the two evils, and then he continued...

Thus the deal was sealed. Who could resist the potential rapture of watching the non-church goers suffer the hysterical, manic babblage of Mr Dribbly Beard whilst we, the blessed ones, tucked into the luxury of our home packed breakfast...even if it was only half a turnip?

Needless to say, I attended church each and every morning prior to school. In the small brown paper bag which accompanied me lovingly wrapped within a sheet of tin foil two slices of toast, thickly buttered by my old granny, patiently waited to be slowly stuffed into my little Catholic gob as those being schooled in the merits of eternal damnation, through sneaky sideways glances, drooled into their disused inkwells.

All I had to do was endure the strange sounds that were tripping forth from Father Adams' blue tinted lips as he stood, ankle deep, within a seemingly Vampiric mist. I later understood this display to be a mixture of Latin, Communion wine and incense!!. 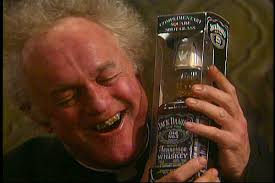 However, it wasn't long before class breakfast numbers dwindled and despite the pleasure of there being less of us to relish the miseries of more of them, such joy was short lived when Mr Hearst retracted the privilege of our mornings respite.

Apparently the churches plan to lure more knees on pews through the bribery of young, innocent and impressionable children had been but a temporary success so, sadly, my days of tin foiled toast and Testaments, came to an unholy end.

Unfortunately, further persecution orchestrated by Catholicism didn't end there for me, and to this very day I genuinely remain affected by it, still, such tales are for another time. In summary,  for all this regime of the righteous wanted to bully and beguile me through their God-threats and their attempts to mould my mind and bend my knees to their way of thinking they failed miserably, I'm delighted to say, serving only to delineate their world of manipulation, deception, corruption and despair.

However!! Miraculously!!...all was not completely lost!!...


During the reluctant period I spent in the clutches of the Catho-holics.........they taught me to appreciate a thing which I probably wouldn't have appreciated as much,  had it not been for the tyrannical experiences they put me through, and that was...

...that regardless of any of their cruelties, notwithstanding the miseries and mental scars those Catholic teachings pressed upon me, I had a true taste of Heaven every single day, thanks to the unconditional love which overflowed from the contents of the little tin foil parcel.