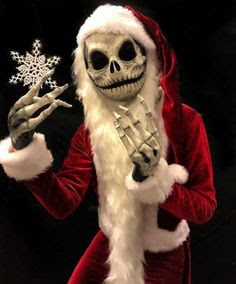 Christmas is upon us again, eh? That magical time of year when we're guilt-tripped into spending an entire day eating and drinking with the same people we'd usually spend every day avoiding and the only 'ding-dong' is the fight which follows hours of festering in their company having consumed copious gallons of alcohol which mostly serves to dissolve any semblance of one's social filter.

And as for Christmas dinner, well, as a matter of health and safety (other people's) I've never cooked one...had I done so, there would have been three phases: 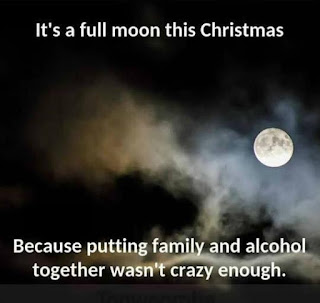 Each far too labour intensive to be arsed with and, anyway, I need a new spade and a bigger garden.

Festive songs abound, which we merrily sing-along to at the family gathering as we joyously dance around granny sitting prostrate on her tinsel-bedecked commode in the living room (something we did when I was a kid, 'cos we couldn't afford a tree) but do we ever really listen to the lyrics?

Some can be quite menacing, especially if we remove the melody and talk in subdued tones with the lights dimmed, holding a torch beneath our chin.

With such a method in mind and the implications of 'Santa Claus Is Coming To Town' explored, let's take a peek at a young mother tucking her little son, Tommy, up in bed one cold and wintry Christmas Eve: 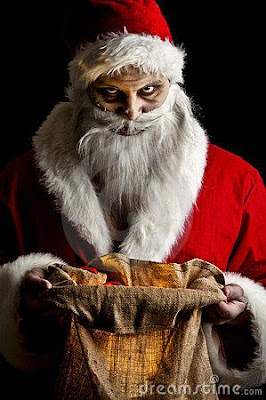 "Settle in, lad, I've something to tell you"

"Mam, you're scaring me"

"I'm telling you why! A big, fat stranger in a red suit with a thick, wiry, white beard, accompanied by several ruminants, is going to break into our house later on tonight".

"He sees you when you're sleeping" 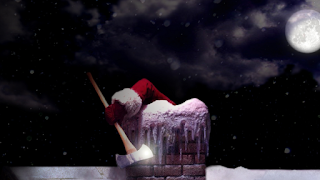 "And you knew about this??"

"He knows when you're awake"

"Just be good, for goodness sake! And he's bringing stuff with him"

"Mam, did you skip your meds again?"

"I wanna sleep at grans house!"

"Hush, hush. Quiet now, I'm going to tell you a Fairytale. It's set in New York where....they've got cars big as bars...they've got rivers of gold..." 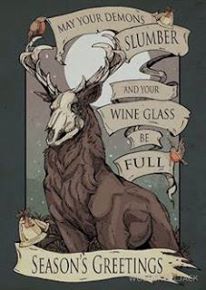 "Oh, mam, that sounds so magical! What's it all about?"

"It's about domestic violence, alcohol abuse, yer dad's criminal record and the realisation that my life is but a requiem playing its mournful melody in the graveyard of my rotting hopes an' dreams.

And a Very Merry Christmas and Joyous New Year to you too...my ever faithful reader....