Only by breaking the links

Of racism and discrimination

Can we truly appreciate

The beauty of our fellow man

That we are but one people! 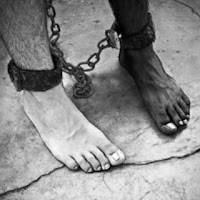