I hate using public toilets and the challenges they force upon you. Challenges like, trying to decipher which loo is actually vacant 'cos the little red & green indicators on the doors are permanently stuck half way between both, just to test your level of assertiveness!!


I also happen to think that the method you choose, to determine the status of occupancy, tells you a lot about an individuals personality...for example...

...there's the dominant user who just barges in, violently pushing at each door until one finally surrenders and slams open with such force as to frighten the shite out of the poor constipative in the adjoining cubicle! (bonus, I suppose).

This is the kind of person who would fearlessly elbow a pensioner under a bus just to get ahead of the queue and out of the rain!

Then there's the timid little mouse who edges its way in gradually and stands with its back against the sink, feverishly biting its nails as it tries to work out, via telepathy, which of the loos are free, because it doesn't dare run the risk of confrontation should it inadvertently attempt to gain access to an occupied stall.

Of course, the mouse could take the ultimate risk and get down on all fours to check underneath the cubicle for legs, but that could involve a lot of embarrassment, awkward explanations...and possibly death, should an occupant choose that very moment to vacate its haven.

Horror defined, would be if either of those risks were  undertaken, only for the mouse to discover the occupant of that particular loo was none other than the pensioner pushing 'dominant' from our previous encounter!!...hence the prospect of 'death'...

Now, this poor mouse is the kind of person who would not only let you use her as a doormat, but would happily oblige by having the word 'welcome' shaved into her back hair (if she possessed any...which she probably wouldn't...but that's why we have permanent marker).

Obviously we're in need of an inbetween here, and that's the cautiously confident loo-user who breezes in, scans the room, spots the 'mouse' at the sink, asks if it's waiting for the loo, to be told the lie "no thank you" through tremulous little squeaks and thus is able to proceed, with confident strides, towards the toilet doors where it cautiously, but firmly, gives them a push until, eventually, an unoccupied lav is revealed, resulting in immediate access...

....much to the misery of the mouse who, by this time, has crossed her legs so tightly as to compromise circulation! 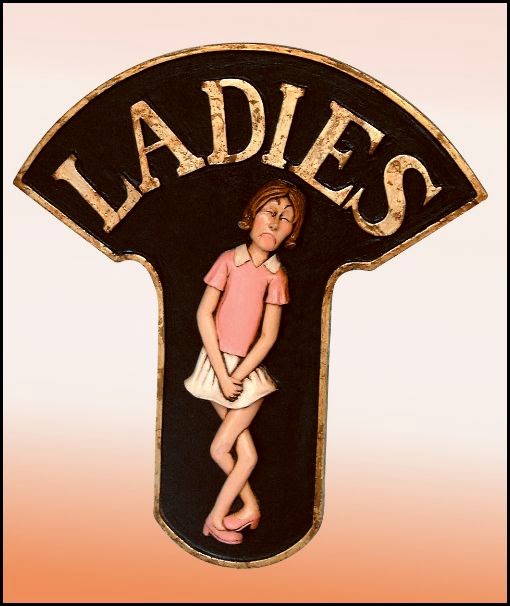 This kind of personality is the kind which is able to smile warmly whilst looking a 'Big Issue' seller directly in the eye before delivering a stoic..."No"...

Oh and whilst we're at it, let's not forget about the other detestable attributes of these places.  I mean, have you ever been bursting for the loo and rushed in, quickly pulling your necessaries down, only to sit your unsuspecting backside upon a warm seat???....yeah....me too....*shudder*...How vile....someone else's buttock heat permeating your pores!

Oddly, there's also a kind of bizarre etiquette which is frequently applied in these establishments, like the 'walking-into-a-smelly-cubicle' etiquette.

This usually happens when you're in a queue and a kindly soul, having completed her own toiletry needs, holds the door open for you to enter and thus tend to those toiletry requirements of your own.

Now then, that's all very well, but if the previous occupant has left in her wake an odour of such toxic proportions as to paralyse your nostrils and remove the lining from your nasal cavity, then there lies a big problem...Because...

...the unwritten rule is that you persevere with the heinous whiff, as, given you have entered this area of your own free will, you are now, consequently, fully committed to its occupancy and have no choice but to suffer all odorous terrors therein.


Indeed, to do otherwise, and instantly vacate the urinal, would be seen as a direct insult upon the previous occupants bowel movement and ultimately its life choices, particularly those connected to all things dietary ...and THAT...is simply not the done thing!!...

'Course, what IS acceptable, is that as you leave, and hold the door ajar for the next in line, you whisper a discreet "I-am-not-responsible-for-the-olfactory-meltdown-you-are-about-to-experience" as your paths momentarily cross.


It's a bit like a relay actually, such whispers being repeated and passed on and on until the foul bouquet is completely eliminated.


Yep.....seems the call of nature is often one for help!!